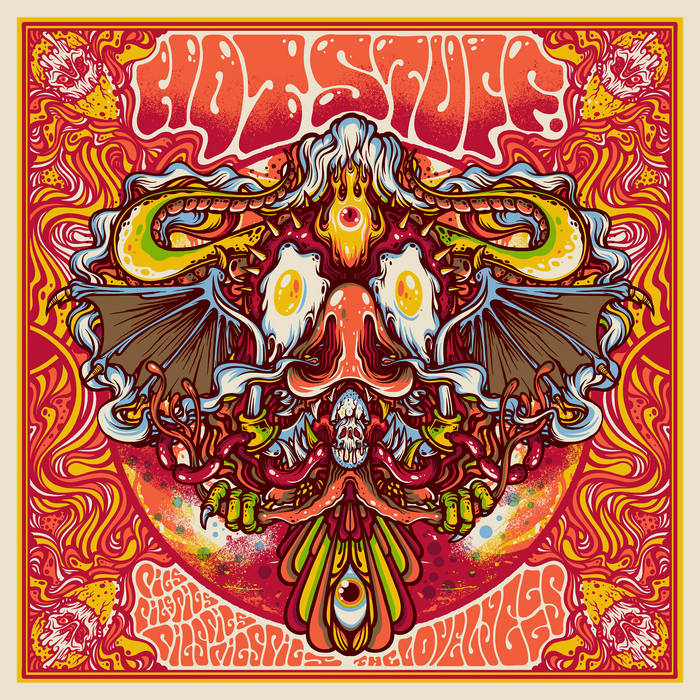 moggydon Seeing Lovely Eggs at the end of this month(April).
It'll be my first gig in over a decade- and for a taster I get a collaboration with Pigs×7!
Life is beautiful(ly fucked up)!!!

bcb723 Pigsx7 can do no wrong in my eyes. Everything is completely top shelf. To be honest, any other band attempting to cover a Donna Summer 70's disco jam would be hard-pressed for a kind word from me... but this is Pigsx7 and this is just great shit.

graham muttram Wow. Love this. A hear the Melvins and big business so much in this. Favorite track: Hot Stuff (feat. The Lovely Eggs).

“When we’re writing we always begin with a single riff, it seems to us that Hot Stuff began life the same way. It’s an untouchable song in a lot of ways but well, here we are.” said Adam Ian Sykes, from Pigs Pigs Pigs Pigs Pigs Pigs Pigs. “...and The Lovely Eggs are just as their name suggests. So easy to work with to boot. They were exactly what we needed.”

The eye-popping art for the single was created by the extremely talented Drew Millward – the artist who also created the sleeve for the bands 2020 12” The Wizard And The Seven Swine – a re-mixed and remastered version of their first ever release track.

All income made from this single is to help raise money for Pop Recs in memory of Dave Harper. Adam said “Dave was a hero to a lot of people and rightly so, his contributions to music in the north east were enormous. Pop Recs is such an important place to the area and a legacy that needs and deserves a great deal of support.”

Pigs Pigs Pigs Pigs Pigs Pigs Pigs are ‘finally’ able to head out for their ‘Viscerals’ album release tour, and The Lovely Eggs are also joining them as special guests at their show in Nottingham. As well as their good friends Blom, the band have invited Richard Dawson, Obey Cobra, Kulk and others to join them on various dates on the tour. Visit www.pigsx7.com for full details.